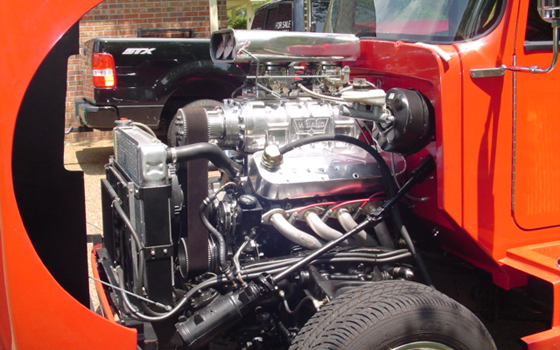 Diesel engines are similar, but simpler then gasoline engines. First, air is allowed into the cylinder and the piston compresses it—but much more than in a gasoline engine. In a gasoline engine, the fuel-air mixture is compressed to about a tenth of its original volume. But in a diesel engine, the air is compressed by anything from 14 to 25 times. If you've ever pumped up a bicycle tire, you'll have felt the pump getting hotter in your hands the longer you used it. That's because compressing a gas generates heat. Imagine, then, how much heat is generated by forcing air into 14–25 times less space than it normally takes up. So much heat, as it happens, that the air gets really hot—usually at least 500°C (1000°F) and sometimes very much hotter. Once the air is compressed, a mist of fuel is sprayed into the cylinder typically (in a modern engine) by an electronic fuel-injection system, which works a bit like a sophisticated aerosol can. (The amount of fuel injected varies, depending on how much power the driver wants the engine to produce.) The air is so hot that the fuel instantly ignites and explodes without any need for a spark plug. This controlled explosion makes the piston push back out of the cylinder, producing the power that drives the vehicle or machine in which the engine is mounted. When the piston goes back into the cylinder, the exhaust gases are pushed out through an exhaust valve and, the process repeats itself—hundreds or thousands of times a minute!

So as you can see diesel and gas powered engines do have many similarities about the way they operate but the differences are what makes diesel engines unique.

One of the biggest difference between diesel and gas engines is the use of glow plugs. Diesel engines use glow plugs to generate warm air which is compressed with diesel fuel to create the force that pumps the pistons. Glow plugs utilize heating elements like the ones in toaster ovens and if they go bad due to corrosion or some other issue it will become extremely difficult, if not impossible, to start your vehicle.

A second cause of hard starting that is more often apparent during the winter is the use of the incorrect engine oil in the motor. It is important to use the right oil for the right season in diesel motors. The summer months may call for a single-weight oil while it may be necessary to use a multi-weight oil in the winter to ensure proper engine function.

Diesel engines have a high compression ratio that places a greater load on the starter motor, which draws amperage from the battery. This puts immense amounts of stress on the battery and makes them more likely to die during elongated engine cranking. If your diesel engine is having trouble starting within a few cranks don't be surprised if you end up needing a jump start.

Common reasons for power loss are often related to the fuel delivery system. One of the biggest issues is neglecting to drain the bowl connected to the main fuel filter. This filter prevents impurities from making their way into the engine by collecting them in this specialized bowl. If it is not drained it will result in hard starting, poor acceleration and a rough idle as sufficient amounts of fuel will not be able to make its way to the combustion chamber.

Diesel engines definitely have their perks, such as great fuel economy for larger vehicles, but they need special care. If you require diesel engine repair in Washington come and see the diesel experts at Tacoma Truck Repair Center. Our team services all makes diesel vehicles performing routine, truck maintenance and complex repairs. Give us a call today at 253-231-5500 or set up an appointment and let us take care of all your truck related needs!